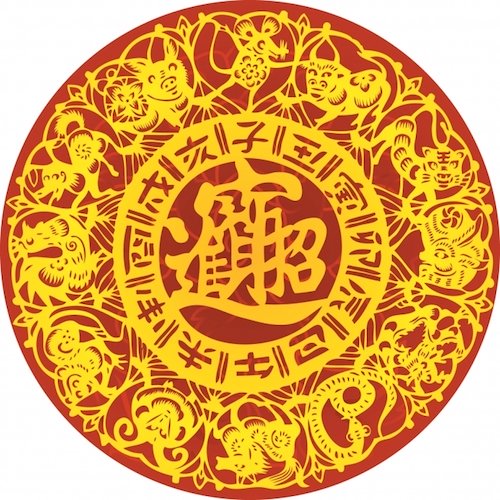 The Legend of the Chinese Horoscope

The origins of the Chinese Zodiac go back a few thousand years. According to the myths, long time ago, Buddha decided to call all the animals on earth. But only twelve came:

The Goat or Sheep

In recompense, he assigned each of these animals a year on the cycle affirming that children born in that year would acquire the personality traits of the animal assigned to that year.

In order to decide their order in the Chinese Zodiac cycle, the animals held a very exciting race. The first one to cross the river would be granted the first year, the second to come in would be the second animal in the cycle, and so on.

The strong, hardworking Ox was in the lead. Suddenly, the clever Rat, jumped on the Ox's back, he did not even feel the little thing getting a free ride. At the last second before reaching shore, the Rat jumped on land, winning the race! The Ox came in second, the Tiger third, and so it went... the happy-go-lucky Pig took his time and came in last... and the Chinese Zodiac and its twelve signs were born...

The Twelve Animals... which one is yours?

In China, individual birth dates are not as important as the year in which a person is born. And if you want to know a person's age, you don't ask how old they are, you ask for their Chinese Zodiac animal.

To know which one is yours, look up the year of your birth below and look at the qualities of that animal to see how much of it agrees with you: More about the Year of the Rat. If you were born in 1962, 1974, 1986, 1998, 2010, 2022 you are a Tiger.
You are powerful, aggressive and courageous. You can also be rebellious and unpredictable but at the same time protective and sympathetic.
The Dog and the Horse are your best signs.
The monkey is trouble.
More about the Year of the Tiger. If you were born in 1963, 1975, 1987, 1999, 2011 you are a Rabbit.
The Rabbit is considered the luckiest of the Chinese Zodiac animals. You are affectionate, virtuous and kind. You are sensitive to beauty and aim for peace in your life.
You are most compatible with the Goat and the Pig.
Your opposite is the Rooster. If you were born in 1964, 1976, 1988, 2000, 2012 you are a Dragon.
The Dragon was a symbol of Imperial power in ancient China; and Chinese consider it a great honor to be born in the Year of the Dragon. Dragons are full of strength and energy, always on the go. You are powerful, wealthy and wise. Here you can learn more about Chinese Dragons.
Look to the Monkey or the Rat and watch out for Dogs.
More about the Year of the Dragon. If you were born in 1966, 1978, 1990, 2002, 2014 you are a Horse.
Horses are popular and very attractive. Talkative and sometimes showy and impatient.
You get along with Tigers and Dogs but never with Rats.
More about the Year of the Horse. 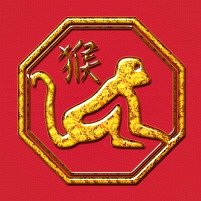 If you were born in 1968, 1980, 1992, 2004, 2016 you are a Monkey.
Monkeys are charming and intelligent, inventive and at times deceitful.
You are able to influence people and are successful at almost anything.
Your friends are the Dragon and the Rat but not the Tiger.
More about the Year of the Monkey. The Five Elements and the Twelve Animals, what do they mean?

In addition to the Twelve Animals in the Chinese Zodiac that determine a person's destiny, there is also the "Five Elements" which are associated with a certain "life force" or "qi/chi" and also have a bearing in determining your luck.

These are the Five Elements in Chinese Culture, each is associated with a certain direction, season, color and energy: The Five Elements together with the Twelve Animals in the Chinese Zodiac form a 60 year cycle.

What's in a Dragon Dance?

Year of the
Tiger

Year of the
Rat

Year of the
Ox

Year of the Snake

Year of the Horse

Year of the Sheep or Goat

Year of the Monkey

Year of the Rooster

Year of the
Dog

Year of the
Pig