The Chinese Lion Dance is often confused with the Chinese Dragon Dance. They are both an important part of traditional Chinese festivities, specially Chinese New Year, and both are thought to bring good luck and scare away the evil spirits. The main difference between the two is that the Dragon Dance is performed by a team of a dozen or so dancers that carry the dragon, whereas the Lion performance is acted out by only two dancers.

The Lion Dancers need to be very agile and fit as they perform a lot of acrobatic moves. One holds the head and the other the body of the Lion. It is typical for the Lion Troupes to be part of martial art schools. 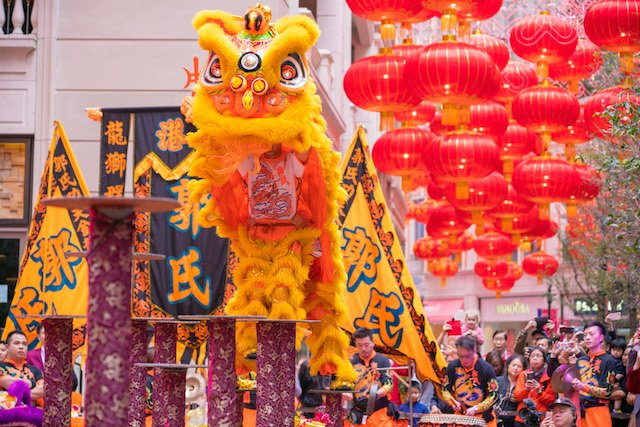 The Chinese Lion performances during the new year celebrations start on New Year's Day and continue through the end of the festivities. They play out during street celebrations to the sound of drums, gongs and cymbals.

The parading Lions run along the streets to bring goodwill and luck to everyone they meet. They visit stores, restaurants and businesses, even market stalls... The Lion Troupes are usually accompanied by their "laughing Buddha" buddy. He wears a mask and a robe and teases the lion with a fan to make him jump, roll around, lie down, etc. As they wind down the streets and locales, people along the way will "feed "hong paos" with money inside to the Lion by handing the red envelopes through its mouth. This is supposed to bring good luck and fortune and is considered a donation for the martial arts school setting up the performance.

Businesses, likewise, will hang from the ceiling a head of lettuce or some greens with the red envelope inside. They "eat" the money and spit out the greens, scattering the fresh leaves around to "spread" out the good luck and also to symbolize a "fresh start" for the new year.

Sometimes the greens or offerings which can often be mandarin oranges, also a symbol of good luck, are placed on the floor for the lions.

The Lion Dance ends with a scroll and message of good luck that unfolds from the Lion's mouth and a burst of firecrackers to scare away the evil beings! The head of the Lion has levers inside with which the front dancer controls the Lion's eyes, mouth and ears. In the Lion's forehead, there is normally a mirror, so that the evil spirits will be scared and retreat when they see their own image. In recent years, the lion dancing styles keep evolving, some becoming extremely acrobatic with the lions performing tricks in high poles. Check out this clip from a shopping mall in Hong Kong during the Chinese New Year celebrations:

You will also notice there are two kinds of lions:

The mean-looking ones are the Northern Lions. Their performances tend to be more on the acrobatic side. Northern Lions are a staple of the Chinese New Year Temple Fairs in Beijing with breathtaking highly charged performances: The Southern Lions have a more delicate and "fluffy" look. These are also more common and the ones we are most used to seeing. The performances have traditionally been more entertaining than acrobatic, sometimes funny and comical. 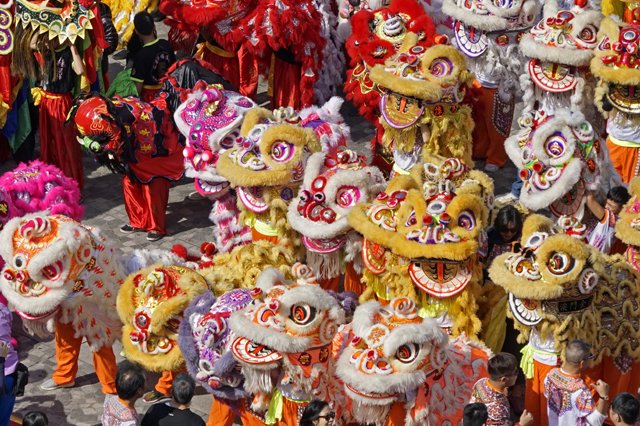 But as mentioned before, their style is being heavily influenced by the Northern lion with some of the performances being just as energetic and acrobatic.